Jerry, Bailey and I rode the Amtrak up to Rochester, New York to attend the 2019 American Council of the Blind National Conference and Convention from July 4-12. The train ride was pleasant and allowed Jerry to relax, sparing him from the 7-hour drive. Bailey slept the entire time, except for guiding me to the lavatory. Once we arrived, the walking shoes went on and the convention navigation began. We walked a familiar circuit from one hotel, then on the skyway, and into the convention center and the sister hotel. We also found it quite pleasant to travel on the street level, crossing the streets to go from one location to the other. Bailey was happy to do some street work and did a great job recalling the often turn-heavy and difficult routes to the meeting rooms. Jerry, bless his heart, scoped out the area and made his opinion clear, “don’t go out alone at night,”, due to the higher indigent population. The police presence during the day and evening hours while the convention center was open, while necessary, wasn’t very reassuring.

We had a sleep number bed, a spacious room; our key cards didn’t work for more than a few days at a time. The food was good, but the restaurant choices was sparse, and we got snacks from the multi-dollar store down the street and Jerry walked to Dunkin’ for coffee in the morning. The fridge and microwave helped us save some money on expensive meals.

I was asked to co-host the Friends in Art musical showcase, and I said, “OK”. What was I thinking? But I am, admittedly, a closet performer, and the evening was fun and a confidence-builder.

My good friend, Cheryl Lawyer and I received awards from GDUI for being advocates for the guide dog movement. More on that later.
Next year is Illinois and I being not sure I will attend, but I do know we will go home with fond memories and a lot to laugh about and remember. 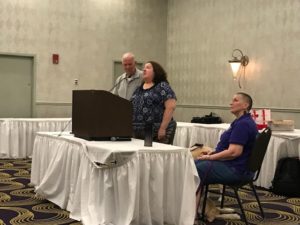