A public apology to our Continental neighbors following a prior post about being denied a taxi while in Ontario.
The second week of September Bailey and I flew up to Niagara Falls, Ontario Canada to meet my sister-from-another-mother, Myla, for a week of fun and what I call, “bumming around,”. The flight and subsequent driver from Buffalo airport over the Rainbow bridge into Canada were pretty much routine. The Customs officer didn’t even ask for Bailey’s documentation and we arrived at the hotel in about an hour.

The hotel staffer, Autumn, oriented me, giving me a room that was near the end of the hall so it was easier for Bailey to find. She also oriented me to the climate control in the room and walked me to the parking lot where I could take Bailey to relieve himself.

We stayed near the Clifton Hill area on Victoria and found it centrally-located, which was a good thing since we didn’t have a rental car the first few days. There was a casino and restaurants, coffee shops and tourist traps lining the entire area and it was walkable and clean.

We ate at the Hard Rock Café at the casino, and shopped in the Hershey’s chocolate shop. Awesom fudge, BTW.

The tour of the wine district was one of the best and our group got along well, no one minding Bailey and my personal needs getting into and out of the 15-passenger van. This involved sitting down on the floor of the van first, then stepping onto the ground because of my knee. I am past the humiliation of it and once I got to the second vineyard, was not feeling too bad, and didn’t care at all after the third winery anyway (insert drunken emoji).

At Lakeview Winery, I recorded the sounds of the cellar’s enormous vats. Walking into the gigantic structure and smelling the fermenting grapes took me back to my grandfather’s wine cellar and for a moment, childhood memories flooded my head. We went up the steps to a platform next to the casks and even Bailey was curious; Myla said he was looking around and sniffing, too.

While we got in the van after the final winery, Bailey decided to jump into the lap of the man behind me, it was the last winery and maybe he thought, we were all loose enough to appreciate his antics. which was correct Silly boy!

The heat wave was hard for me and I got a mild case of dehydration and had to rest and drink more water after the first two days. I listened to my body and the rest of the time I was okay, even with the heat.
Monday was the day for challenges. The taxi driver for our morning trip to Tim Horton’s refused to take Bailey. He said he knew it was a service dog and “didn’t care,”. We were dispatched a second car, which was fine. We thought it was a fluke, and I called later in the day to report the driver to the taxi company. I also called the constabulary, and wasn’t impressed; the sergeant on duty acted in a dismissive and patronizing manner. “If we come, at all, it will be hours, we’re busy,” he stated, referring to my request to make an incident report.

That evening, we went on a cruise around the Falls and watched the fireworks. We called a taxi back to the hotel and the driver refused to take the dog. Myla and I think it is the same driver from earlier in the day but it was dark and he drove off before we could snap a picture or get his cab number.

The next day Myla said we should rent a car so we didn’t have to take the chance of this happening again. I agreed, not wanting to keep having to be discriminated against.

We toured Niagara on the Lake, finding a most excellent gelato bar. We ate the best dinner at an Irish pub called Macmulligan’s. Myla had fish and chips and I had a sampler plate with three mini pies: curry chicken, Shepard’s pie and steak and mushrooms, I still can’t choose which was better, the shepherds or the steak and mushroom pie.

We found another mall, with more chocolate and I found a Marshall’s and bought a few shirts.

Next year, we are going to Seattle. 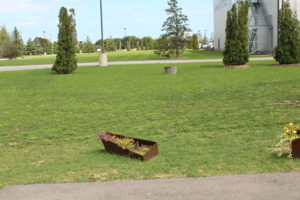 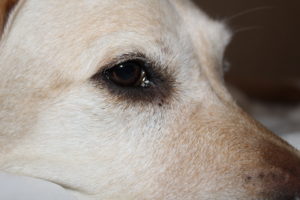 Love your descriptions of everything you experienced…and Bailey’s antics! Sorry to hear guidedogs are not always considered the champions they are in real life!