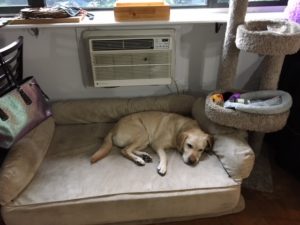 yellow lab Bailey curled up on new round dog bed

It began in 2015, after Annie met Bailey and the two became a team. Bailey was making the transition to his new partner, a new home, and a new routine, all of which probably contributed to Bailey’s attitude about the dog bed in the office.

After the destruction of dog bed one, Annie tried a new mat, professed by the company to be “chew proof”. It was not Bailey proof, but durable. Annie thought reinforced steel mesh corners would be an improvement, but did not share this with the manufacturer, thinking it might insult them.

The next bed was almost too big for the office, but after the dutiful corner-chewing, along with numerous patch work and generous bitter apple spritzes, it survived, tattered but useful.

After hearing a few remarks from office mates asking when Bailey was going to get a new dog bed, Annie decided it was time for a change, plus she was tired of sewing and hot gluing up the corners a third time. Annie shops online, and the decision to try a round bed is like a canine-inspired epiphany.
chewing won’t occur, because, well, round beds don’t have corners.

A 40-inch polyester-filled bed is ordered. It is delivered and schlepped to the office three days later. The paratransit bus driver smiles when Annie says it is her guide dog’s new bed.

The transition does not go well; Bailey applies passive resistance, unwilling to get off the old bed; Annie must wrestle the old bed from under Bailey’s large Labrador butt, and afterward, convince Bailey the new fleece-topped cuddly bed is not a huge toy. Bailey ignores Annie’s professions and verbal coaxing, like, “You will be warmer, right Buddy?” and so on. He paws at it, finds the fabric handle and drags it from one side of the office to the other and eventually, with a few treats, and the “place” command, he takes a nap upon it. Day two is much the same: enter the office, paw at it, fling the bed around like it is a hover craft, and afterwards, decides he will take a nap under the desk instead. Okay, thinks Annie, he will go to the bed when he wants to curl up into a doggie-ball.

Day three is much like day two with one exception: he tries to drag the bed while Annie and the computer tech are troubleshooting. Annie has to take charge and put an end to the shenanigans. Luckily for Bailey, the tech is a pet lover and he approve of the tough love modality.

It is now the weekend, and Annie anticipates the traveling dog bed shenanigans will continue. Annie wonders what is going on inside Bailey’s peanut, tries and fails to think like a dog. Is he confused? Maybe he really does see the bed as a huge fluffy, dog toy? It is a sobering thought and might be a little unfair for Annie to think this about her sweet and loyal guide dog who is also a dog possessing intelligent disobedience skills.